Brand new to the marketplace is a highly efficient solar charger that not only charges up your smart phone or tablet to full power, but will still give you enough light to last all night long.

While the lamp is a great addition to any survival or emergency kit because of its ability to provide light when there is no electricity, the Waka Waka Power takes that to the next level. Not only will it give you good light night after night, it does this in addition to powering up your electronic devices as well.

By gathering energy from the sun during the day, this device will completely top off the batteries for your cell phone or tablet in less than two hours. This is as quick as or even quicker than plugging your phone into a wall charger.

When I received my sample product, I noticed it was a bit smaller in size than the original light. Smaller is usually better as long as it performs as expected.

Here is my experience with the Waka Waka Power.

I placed the device outside in full sun till the indicator lights on the unit told me it was fully charged. Depending on the sun's exposure, there are blinking lights that let you know how fast the solar panel is gathering stored energy.

Since I had full sun, it only took a few hours for mine to become fully charged. There is also a battery indicator on the unit that tells you the status of the battery's power level. 1 green light means 25%, while 4 green lights means you have 100%.

Once I had a full charge on the Waka Waka Power, I was ready to see how well it did in charging my Droid 2 smart phone.

I made sure my phone was nearly out of juice beforehand. It was down to 10% at the start of this test.

The Waka Waka Power doesn't come with any cables or connectors. You use the cables that came with your phone. On the device are two USB ports. One regular sized USB and one Micro-USB.

By using my smart phone's cable, I connected one end to the USB port on the device and the other end into my phone. 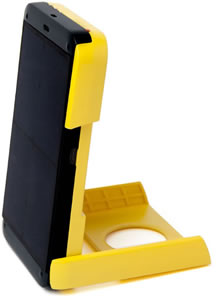 When I plugged it in, I noted the time to be 2pm.  I pressed the button on the charger and immediately my phone began to charge. There is also a blue light on the side of charger that tells me it is charging the phone.

Having the ability to do that day after day and not use any electricity from the grid meant this product gets not only an A grade, but a spot in my home emergency kit as well as my backpack that I take camping with me.

I usually take an extra phone battery with me when I'm out in the woods but now I won't have to.

The next phase of the test began immediately after I disconnected the Waka Waka Power from my smart phone. I wanted to see how much light was left and for how long it would shine after using some of the juice for charging my phone.

I pressed the button to turn the light on and left it on. Wasn't sure how long I'd get but I wanted to try and get a specific time frame. The manufacturer says that the amount of light left will depend on how much power you used when you charged your device so it could be different amounts of time for different people.

No, I didn't sit there for hours on end, but I was back at my computer that night to witness what happened.

Not until 11:23PM did it run out of light. At that time, it shut itself off. I was typing away on my laptop with the Waka on my desk when it happened.

That's about 8 hours of light left over after fully charging my Droid cell phone.

A full charge on a smart phone and another 8 hours of usable light – that’s a winner in my book and I recommend everyone have one of these in their preps.