Snakebites in the Field

In Europe and North America more people die from bee and wasp stings than snake bites. Yet a snake bite in a survival situation is a nasty thing to contemplate. A bite can be life threatening; and unfortunately, only hospital care can improve the chances for survival of the person and to reduce the aftereffects of a bite. However failure to take preventive measures or failure to treat snakebite properly in a survival situation can result in needless illness.

Care of Snakebites in the Field 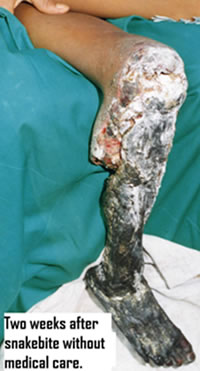 Deaths from snakebites are rare. Although all bites by poisonous snakes must be considered medical emergencies until it is proven that envenomation has not occurred, many such bites will prove not to be life threatening because the snake did not inject venom. No envenomation occurs in approximately 20% of documented bites by New-World pit vipers - rattlesnake, copperhead, water moccasin, and fer-de-lance. An even higher percentage of bites inflicted by other snake families (e.g., up to 50% for cobras and 75% for sea snakes) are "dry."

The most common complication of pit viper snakebites is called Compartment Syndrome (in which increased pressure caused by inflammation and tissue swelling within a confined space in the body impairs blood supply, leading to nerve damage and muscle death). This can be a direct result of the snakebite or also from misapplication of a constriction band. Snakebite can also lead to:

Most viper bites contain hemotoxic elements which damage tissue and affect the circulatory system by destroying skin tissues and causing internal hemorrhaging. Viper venom also contains neurotoxic components which immobilize the nervous system, affecting the victim's breathing, sometimes stopping it. Most vipers have venom composed primarily of hemotoxic properties. Baby rattlesnakes and the Mojave Rattler are an exception; they have venom which contains more neurotoxic properties than hemotoxic -- which makes them very dangerous. The Sea Snake, Coral Snake, and Cobra family of snakes also have venom with dominant neurotoxic characteristics but they too have hemorrhagic toxins. The venoms also contain digestive enzymes (cytotoxins) to aid in digesting their prey. When you have been bitten, the venom also begins to digest you from within (Happy thought). These venoms can cause a very large area of tissue death, leaving a large open wound. This condition could lead to the need for eventual amputation if not treated.

A snakebite, whether from a venomous or non-venomous snake, usually causes terror, with nausea, vomiting, rapid heartbeat, diarrhea, profuse sweating, which may be difficult to distinguish from signs of true envenomation.

Shock and panic in a person bitten by a snake can also affect the person's recovery. Excitement, hysteria, and panic can speed up the circulation, causing the body to absorb the toxin quickly. Signs of shock may occur within the first 30 minutes after the bite.

Pit vipers, such as rattlesnakes, cotton mouth (water moccasins), copperheads, Fer-de-lance and bushmasters are the most common venomous snakebites in the Americas. Many pit viper bites are dry (venom is not deposited), and no systemic symptoms or signs develop.

Some of the signs of envenomation may include:

NOTE: Neurotoxins such as the Mojave rattlesnake, coral snakes, etc are a particularly dangerous for its ability to inflict severe, even fatal, injury without any appreciable degrees of pain or swelling; patients bitten often do not exhibit these signs and symptoms because its venom is more neurotoxic than that of the average pit viper. The absence of local symptoms and signs may erroneously suggest a dry bite, producing a false sense of security for the victim. Weakness of the bitten extremity may not become evident for 12 hours or more. Systemic neuromuscular disorders may be delayed for 12 hours and include weakness and lethargy; altered mental state, including euphoria and drowsiness, blurred vision, slurred speech, and difficulty swallowing; increased salivation; and respiratory distress or failure. Once the neurotoxic venom effects manifest, they are difficult to reverse and may last 3 to 6 days. Untreated patients may die of respiratory failure.

The only proven therapy for snakebites is antivenom! Antivenom neutralizes the venom and has to be started within hours of the bite. Unless you have a portable emergency room with lab support, and a doctor along, forget about carrying the IV solutions, 10-20 vials of antivenom for vipers or the 10 possibly needed neurotoxin snakes. The person needs critical care and promptly!

The phrase "first, do no harm" has significant meaning here because many poor attempts at first-aid may do more harm than good; including things like making an incision over the bite, mouth suctioning, tourniquets, ice packs, or electric shock. A primary concern in the treatment of snakebite is to limit the amount of eventual tissue destruction around the bite area.

If you determine that a poisonous snake did bite an individual, take the following steps:

NOTE: Snake toxin is not inactivated by changes in temperature or pH. Application of ice, hot packs, or vinegar only wastes time. All other out-of-hospital interventions (e.g., tourniquets, topical preparations, suction by mouth or with a device with incision, cryotherapy, and electrical shock) are of no proven benefit, may be harmful, and may delay appropriate treatment.

A snakebite wound can become infected from bacteria in its mouth. With nonpoisonous as well as poisonous snakebites, this local infection is responsible for a much of the damage that can result later.

Want to Share Your Impressions?
We will be grateful if you leave a review, it may be useful to other users of our site
Write a review