The bola has been used for hundreds of years in hunting and in warfare. Deceptively simple in design, it consists of three weights at the end of cords that are attached to one another. It is held where the cords join, spun around the head, then thrown at the target. The weights wrap the cords around the target, immobilizing it for dispatch. 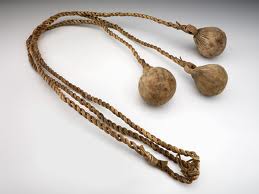 Here is a simple way to make a bola at home.

Take three tennis balls and, using a razor knife, cut two Xs on each ball. The Xs should be on opposite sides, one across from the other. These Xs need not be very large, perhaps the size of a nickel or so.

Cut three lengths of paracord or clothesline about 3-4 feet long. Tape the end of each cord to a pencil or a straightened-out metal clothes hanger and push it through the holes you made on the tennis balls, one cord for each ball. The cord should run through the ball. Tie a large knot on the cord to keep it from pulling back through. You might find it easier to thread the cord through a metal washer first as that will prevent you from having to make an enormous knot.

Once you’ve done this for all three balls, tie the loose ends of each cord together. You may want to wrap duct tape around the cords at that end as well, making something like a handle.

Now you’ll want to add some weight to those tennis balls. Push pennies, small rocks, or nuts and bolts through the holes you made on the balls. You don’t want to add too much though otherwise, the bola won’t be easy to control. You want just enough weight to give each ball a bit of heft.

To use, grasp the bola where you made your duct tape handle and begin twirling it around your head. When you have it spinning at a good clip, throw it at your target as you would a lasso. It will take a bit of practice but you’ll get the hang of it. Your target should be the legs of the animal or bad guy. To practice, use a fence post.

Making a Bola in the field with rocks.