Got Your Food Supply?

Strive for a month's worth of food to sock away for an emergency or bad times.

Two-way radios, the modern version of the walkie-talkies many of us had as kids, can be a great tool for emergency communication among family members. Provided, though, that you understand their limitations. Bear in mind, we’re not talking about amateur (ham) radio. That’s a whole different ballgame.

Privacy
These radios all use the same group of frequencies. On the plus side, this means you can easily program several radios to communicate together, even radios from different manufacturers. However, this also means that anyone else can listen in to your conversations if they hit upon the same frequency. Your safest bet when using these radios is to avoid talking about any confidential information on the air. 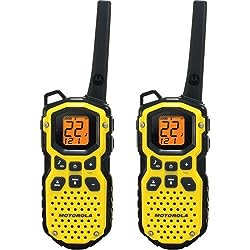 Range
Manufacturers like to make rather exaggerated claims regarding the range of these radios. You’ll see packages that say, “up to 25 miles” and other such nonsense. Yes, the radio might truly transmit that far…if there is absolutely nothing between the sender and receiver. The problem is that things like buildings and trees easily block the radios or at least inhibit transmission. Realistically, if you can get a mile or two of range from the average two-way radio, you’re doing pretty darn well. However, that also means that anyone who wishes to listen in to your conversation must also be in that range. Which, actually, might not be a good thing when you think about it.

Power
Many models of these radios take the rather common AA or AAA batteries. That makes life a little easier as you won’t have to hunt down some obscure size. However, by their very nature, batteries go dead after a while. If you plan on relying on radios like these, better plan ahead and add a solar battery charger to your preps.

No satellites or towers are used
Unlike cell phones, for example, two way radios

are sort of a closed system. The transmission is sent out directly to the receiver, rather than bounced off of a tower or satellite. This means that even if the entire electrical grid is down, the radios will still work (provided they weren’t impacted by the event that took down the grid, such as an EMP strike). There really isn’t a downside to this, other than the lack of towers and such helps to limit the effective range.

Two-way radios are a fun way to stay in touch when you’re out and about with your family. When times are normal, they can help keep you from chewing up minutes on your cell phone. But, if you plan on using them after a major disaster, it is important to understand they are not always what they are cracked up to be.

Steve Thibeault is the owner of survival-gear.com. He likes fishing, hunting, and anything outdoors. Tired of the pretend survival kits all over the internet, he decided to create quality emergency kits that people could actually use and depend on if there was ever a need.